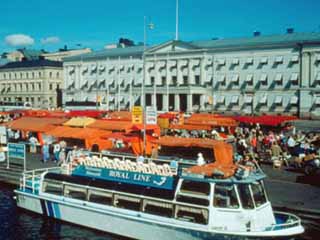 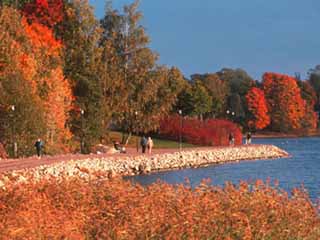 Finland offers endless ways to enjoy its natural beauty. In the country of beautiful lakes and forests, you could be cruising on a lake ferry, hike and camp in remote forests, cycle along idyllic bike paths or skate on frozen lakes. Many Finns still enjoy themselves simply by spending their holidays in a little summer cottage by a lake, a traditional sauna nearby.


In the north of Finland you’ll find Lapland, one of Europe’s last areas of great wilderness – you can spot herds of reindeer wandering about. Believe it or not, here you can even find Santa Claus Village with the ‘official’ post office.


Less well-known is that Finland is also a country of obscure competitions; the Wife carrying Championship or the World Air Guitar Championship to name just two!


Maybe because of the fact that there are only 17 people per square kilometre in Finland, Finnish culture is shaped by independence, endurance and a love for nature. Although often said to be rather reserved and quiet, most Finns turn out to be very warm people once you got to know them a bit more.

Places to go in Finland

After the Communist revolution in 1917, the Finnish senate declared independence from the Russian tsar. After this a bitter, though short civil war broke out when the leftwing parties undertook a coup to force the conservative government from power. After just 5 months the government troops regained control and the civil war ended.


For a time Finland had wanted to establish a monarchy and had even decided on a German Prince to take on the Finnish throne. This plan was abandoned following Germany's defeat in WW1 whereafter Finland chose instead to become a republic.


When in 1939 Finland refused to allow the Soviet Union to build military bases on its territory, it was attacked despite a non-agression pact which had been signed in 1932. The Finnish troops' defence of the nation against the might of the soviets has since become legendary and it is one of only a few countries in the region to never have been occupied in the war.


In 1941, Finland fought the Russians again in the Continuation War which ended in armistace in Sept 1944.


Finland persued an active policy of neutrality during the Cold War as evidenced by initiatives such as its hosting of the Conference on Security and Cooperation in Europe held in Helsinki in 1975.


After WW2 Finland developed its welfare system and economy. It quickly recovered from post-war recession, and experience rapdic economic growth and change as it moved from an agricultural to a industrial and technology-based economy.

The Finnish political party system has been relatively stable for the last 100 years. The gap between the different parties is centered around certain specific issues namely the ideal of nationality, the language issue (Swedish people are a minority, still it is the official language), the socialist vs. non-socialist divide, and how the rural population is represented. The division of the political Left is also important in terms of its impact on the political landscape.


Finland has a multiparty system, that can be summarised as follows: the three biggest parties each have 20-25% of popular support and six smaller parties form for the remainder. The environmentalist Green League has recently gained influence to become a prominent minority.


Finnish government coalitions are often large, and their composition is often politically unconventional with varying political parties joining together.


Since 1982, all Presidents of the Republic have been members of the Social Democratic Party. Tarja Halonen became Finland's first female President in 2000, and she was re-elected in 2006.

Compared to Sweden and Norway, Finland has a rather flat terrain. Nevertheless it is a country where nature’s beauty is omnipresent: there are no less than888 lakes with 98,050 islands and 32 national parks. Forests cover over two-thirds of the country's land area, whilst lakes and rivers make up nearly another tenth.


In the Lakeland and Lapland areas, you’ll find forested hills and fells. This great abundance of wetland areas provides a perfect habitat for much flora and fauna including large numbers of waders and water birds.

The economy has changed incredibly since the second world ware when it was practically all based on the country's agriculture. It is now dominated by the manufacturing industry, especially engineering, and electronics and telecommunications (just think of mobile phone giant Nokia!).


In terms of new technology, the Finns are frequently able to beat the Americans or Japanese in respect of innovation such that places like Helsinki or Oulu have attracted many high-tech companies to set up there.


The country is now one of the richest 15in the world in GDP per head terms despite being one of the smallest members of the EU and contributing less than 2% of the EUs GDP. It relies heavily on its natural resources and exploits these to its benefit, but it has also developed new areas of competitive advantage, most notably perhaps in its intellectual property. It has a highly skilled workforce following years of investment in a world-leading educational system.