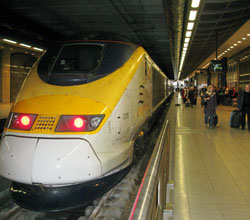 The Eurostar operating between London and Paris/Brussels is now a firm favorite with European Rail travelers taking passengers at speeds of up to 300km/186mph. The travel time between London and the continent has been continually reduced over recent years and now takes just 2 hours to Brussels and 2 hours 15 minutes to Paris since the launch of Britain's high speed network and the move to London St Pancras in November 2007. A wide range of fares and schedules are available at discounted rates to European rail pass holders, so that you can tailor your ticket to your specific needs.

The fares you are quoted will also include the price of the mandatory reservation you will need. A full buffet service and licensed bar operates on each train and all stations served by the route offer comprehensive catering and other facilities.

It was the ever-increasing traffic through London’s airports and associated problems of air and noise pollution which plagued the city, which was a driving force behind the introduction of the Eurostar service. Though troubled by initial teething problems, the Eurostar service is clearly coming into its own offering a highly efficient alternative to the environmentally damaging route by air, to the very heart of Europe. The service currently commands over 70% of the London to Paris route and 65% of the London to Brussels route. At the end of 2007 Eurostar's had welcomed on board nearly 85 million passengers.