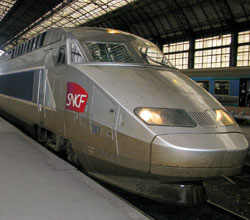 The network of high-speed TGV (Train à Grande Vitesse) trains, which have been in existence since 1981, connects 200 destinations in both France and the rest of Europe. It is this network most renowned for speed, reaching
a record 357mph in test runs, which is able to offer passengers amazing journey times such as Paris to Geneva in 3 hours 45 minutes or Brussels to Avignon in under 5 hours.

Running on specially designed and built high-speed rail tracks, the idea for these highly efficient transport links originated back in the 1960s when the growth of the airline industry was becoming ever more apparent. The environmentally preferable train links were therefore developed as an alternative. The first link to be formally opened in 1981 from Paris-Lyon virtually destroyed its airborne competitors. The great advantage that this network has is that it is able to run on the infrastructure which is already in place and therefore linking additional towns and cities is relatively inexpensive.

The latest TGV rolling stock to streak across the French countryside consists of double-decker trains. These therefore double the carrying capacity of the trains whilst still maintaining the same speed and service. All TGV trains offer catering facilities, family carriages and private telephone areas to help make the journey even more convenient.

In 2003 TGV carried it's one billionth passenger.